May 8 – On Friday May 8, 2015, the POHF, Inc. Mission Team traveled 3 ½ hours to Panama City, Panama at 9:30 PM from Atlanta, GA. Our driver picked us up and we arrived at the Panama Baptist Convention Camp ground, Seacrest Santa Clara after a long bus ride around 1:00 AM. 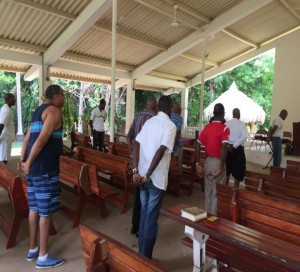 May 9 – We joined the Central Panama Baptist Association women and men annual retreat. In the morning we attended the festivities. Roberto Springer, PA and Donovan W. Christie, MD presented topics to the men brotherhood. After a wonderful fellowship, we headed to Colon, Panama.

After the service we had lunch at First Isthmian. We then drove to Costa Abajo-Salud, Colon, over the Gatun Locks of the Panama Canal, to set up lodging prior to seeing patients in Rio Indio. We stayed at a private residence, the home of Roberto A. Reece retired U.S.A.F., a member of First Isthmian Baptist Church of Colon. Several members of the team slept on air mattresses on a cement slab with a straw covered roof overlooking the ocean. The other half of team slept on air mattress or doubled up in beds in 2 bedrooms and kitchen/living area without air condition and slow moving fans. 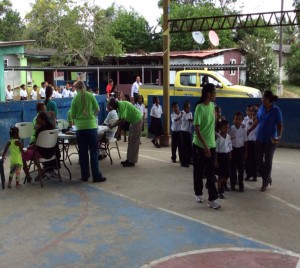 May 11 – Day 1, Rio Indio – In the morning we drove to Rio Indio to set up the area where we would practice medicine. We arrived at the site at 7:30 AM. The area was an outdoor gymnasium, the size of an outdoor basketball court paved with concrete. The area was open on all sides facing concrete bleachers and surrounded by forestry on the backside.

The front side was adjacent to a 2 lane main thoroughfare. On the drive to the site, we passed several small houses with open front doors likely welcoming the morning breeze and motorist viewing. 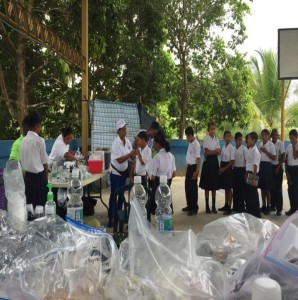 We were greeted by children going to school dressed in their school uniforms that signified their grades in bright colors of blue skirts and pants and light blue shirts (elementary), blue checkered skirts and blue pants with white shirts (middle school), and khaki pants and khaki shirts (high school).

There was an open central gathering area for announcements such as city planning. We treated many diseases including hypertensive emergency with a tachyarrhythmia, an acute abdomen and severe acute mitral regurgitation which were sent to the hospital, acute events of hypoglycemia, peripheral vascular disease, cellulitis, osteoarthritis, urinary tract infection, helminth infection (worms) and scabies and other skin rashes.

A nurse from the department of health came to the site to administrator vaccines to patients, as this is their flu season. We had a late lunch around 1:00 PM of beef soup with yucca, corn, chocho and yam. The day concluded at 3:30 PM after attending 307 patients and giving 73 vaccines.

May 12 – Day 2, Rio Indio – The prior day work was rewarding but the night brought a storm that cut off the electricity for a couple of hours. With no air movement from the ceiling fans, the rooms were extremely hot. When we arrived at the clinic site at 7:45 AM, 10 patients were waiting to receive treatment. We quickly set up our stations. The stations included a check-in where vitals were obtained manned by Miroslava (Mimi) McCommons, MA; Alenka Gavric, MA, and Anna Kolar. The patients were then triaged to one of 4 providers, Donovan W. Christie, MD, Naomi Kirkman-Bay, MD; Jacqueline D. Christie, FNP and Roberto Springer, PA and their interpreters. The medical staff, Marisol Dyer, RN; Chelsea Heyman RN; and Michael Heyman, MA assisted at the evaluation stations. The patients were then directed to receive an IM medication injection by Niko Blake, MA or to the pharmacy station to have their prescriptions filled by Julissa Ashao, MA and Kimberly C. Hutcherson, MD. The providers who gave injections to patients hips administered the medicine in a make shift exam room with a mattress on top of a table and 2 hanging sheets making a room with 2 cement walls at the corner of the outside gym. 168 patients were seen on the second day in Rio Indio. The majority of these patients were seen in the morning. We were then thanked by the locals with lunch which consisted of a stewed chicken wing and rice. After lunch we treated 20 additional patients. With all the patients seen, we headed back to the house to pack our luggage. We traveled to Colon, Panama for a modern night stay at the Four Points Sheraton Hotel. 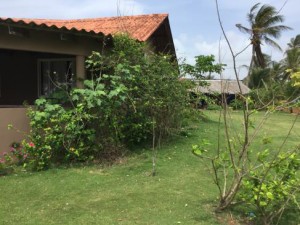 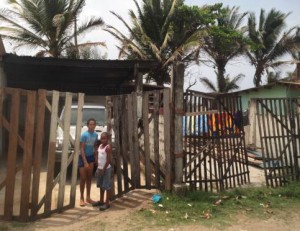 May 13 – We traveled from Colon to Panama City. During our voyage we had the opportunity to visit the historic Panama Canal at Miraflores Locks and watched a large ship transit the canal. 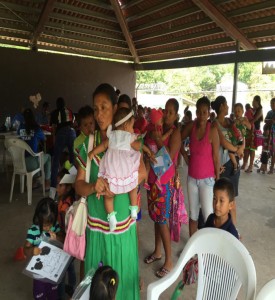 May 14 – Day 1, Ancon district – The area where we set up our clinic was at the intersection of Mocambo Arriba, Kuna Nega, and Valle de San Francisco towns known as the Ancon district.

The Ancon district is 30 minutes east of Panama City located behind the city dump. The site was similar to the site in Rio Indio but the space was about 1/3 smaller. Our set up was also different. The providers all worked from one large table, each of us taking one corner of the table with our interpreter/ nurse by our side and a chair for the patients to sit.

We were able to exam our patients while they sat down. The head, eye, ears, nose and mouth exam was easy. The heart and lung was accessible as well. The difficulty came when abdominal or pelvic examination was necessary. In Rio Indio, we had space set up for that exam but not in the Ancon district. We took good histories of symptoms and treated accordingly. Niko Blake, MA performed injections of ceftriaxone, decadron, B12, Phenergan, and Toradol as prescribed by the providers. 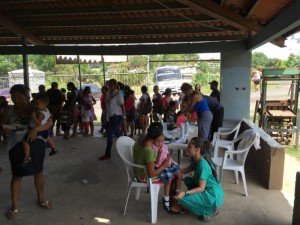 Mimi, Alenka and Anna worked the triage area by assessing chief complaints and vital signs. It seemed to be a non-stop flow of patients coming from the streets. The people are Indians from various tribes who came to the city for a better life. They built shack houses and many are squatters. The disease processes treated included a tremendous amount of dysentery/diarrhea due to the poor water supply and giardiasis. We treated many skin infections from insect bites, urinary tract infections, vaginal infections, osteoarthritis and high blood pressure. The main issues were kids with dysentery and parasitic infections and mothers with vaginitis and gastritis. We also treated upper respiratory infections including bronchitis and pneumonia. The elderly people complained of osteoarthritis symptoms such as joint, shoulder, back and knee pain. The pharmacy line was the longest as providers wrote scripts on the index cards which were then taken over to the pharmacy area. Julissa Ashao, MA and Kimberly C. Hutcherson, MD worked tirelessly filling one card at a time. Most patients received 3 or more medication with vitamins. We treated 281 children, women and men on day 3 treating patients. 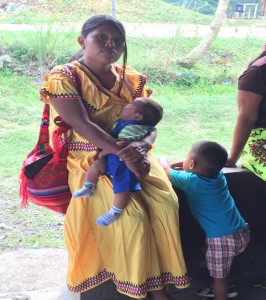 Local officials in the area visited us. The honorable Licdo Ivan Vasquez of the Valle de San Francisco, Ancon district was pleased with our work. He thanked us for our mission and promised to push for governmental support to the area. In the past 10 years the Government built a road that traverses the area but still there were no water sources and electricity.

The goal is to build a water purification system that would supply water to the people of the area. The estimated cost of this project is 10 million dollars. Ivan Vasquez assistant explained that the monthly income of the typical Panamanian does not exceed $500.00 US dollars per month. Adult people in the Ancon district are illiterate and thus do no possess marketable skills.

I spoke to one girl, age 19 who made $80.00 per month taking care of 2 children. Many of the women are age 14 and up and have several children. One woman we treated was age 39, had 11 children and 6 grandchildren and we diagnosed her with her 12th pregnancy on site.

The local chief of police, Captain Lemus also visited us and provided oversight of our activities. He was fully uniformed and armed with a .40-millimeter automatic pistol. He spent several hours along with one of his female officers manning our activities. We did not expect any trouble but it was comforting knowing that they were there. The need in the Ancon district was more severe than that of Rio Indio as we saw more single mothers, infants and very few able body male figures. The men of the area had several women and did not make significant salaries to support them. Because of the lack of education the women seemed to be victimized without the proper opportunities offered by the Panamanian Government. 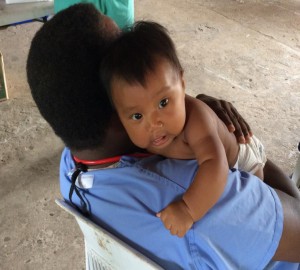 We had a full day seeing almost 300 patients and dispensing over a thousand bags of medications, vitamins, coloring books, toothbrushes, toothpaste and shoes. The people were very appreciative and humble in their mannerism. They spoke with low voices that you could hardly hear without putting your ears close to their mouths. Dr. Christie worked with a retired Panamanian Registered Nurse Floriza O’Neal (Flora) who was just awesome. She worked as his translator and assisted with procedures. They averaged between 50 and 75 patients per day. Flora educated Dr. Christie on the Panamanian and specifically Cuna culture.

May 15 – Day 2, Ancon district -Our last day of clinic was eagerly anticipated. We arrived at the Ancon district at 7:30am unloaded and set up the clinic. Several people were already there, waiting on us to set up. Tables and Chairs were brought in from the local church and we were ready by 8:15 am. After our morning prayer we started to see patients with the same vigor we had on Day 1. We had ample medications to dispense as we had estimated to treat overt 1000 people. We treated dysentery, parasites (helminths), skin infections, pneumonia, pelvic inflammatory disease, infected wounds, osteoarthritis, strains and sprains, etc. The team worked hard and with vigor as more and more families approached the site. The only medication that we ran out of was ibuprofen but we were able to switch to aspirin for pain control in adults. We ran out of all multivitamins but switched to vitamin A supplements and Folic acid. At the end of clinic we had helped another 287 people. The grand total of all patients treated was 1047 patients, the most patients treated out of all the trips that the POHF, Inc. has organized. 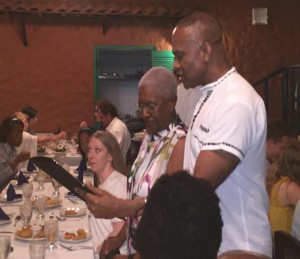 May 16 – Saturday was a day of reflection and celebration. We had the pleasure of going to a traditional Panamanian restaurant, Las Tinajas and enjoyed the local cuisine. After dinner the POHF, Inc. presented the Humanitarian Service Awards to Dr. Cleveland Cooper’s widow Matilde Cooper RN. (Dr. Cooper pasted in March 2015.) Dr. Cooper is the founder of the Fundacion Medico Cristiana de Panama; a short-term medical and dental relief organization designed to aid the people of Panama.

May 17 – We boarded an early flight from Panama to Atlanta. The team was tired but fulfilled by our efforts.

On behalf of the Picture of Health Foundation, Inc., I would like to thank each and every one of our donors, supporters, and volunteers. We are blessed to be associated with such a giving community of individuals from all walks of life who simply care about “helping others.” Your time, prayers, and financial support made the mission trip to Panama possible. You helped US make a difference in the lives of others.